What's the meaning of the Pomegranate »

This page is about the meaning, origin and characteristic of the symbol, emblem, seal, sign, logo or flag: Pomegranate. 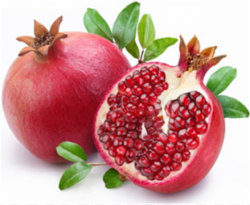 The pomegranate is a fruit with a very long history, both as a culinary staple and as a cultural symbol.

Pomegranate cultivation began in the ancient Middle East, and from there it spread out far and wide, reaching territories as far flung as China, Korea and the Mediterranean basin. Naturally, the fruit acquired many different symbolic meanings on its travels, but there are certain threads that run through multiple locations and time periods: The pomegranate is widely considered a fertility symbol and aphrodisiac; its shape, color, juicy pulp, and large amount of seeds all contribute to those associations. Pushing those themes a little further, the pomegranate has also come to symbolize blood and, in some cases, flesh as well:

BUDDHISM: along with the peach and the citrus, pomegranates are one of the “Three Blessed Fruits” of Buddhist tradition. The story goes that there was a powerful female demon (known as Hariti in India and Kishimo-jin or Karitei-mo in Japan) who kidnapped young children and feasted on them. The Buddha, however, managed to placate her ferocious desire by offering her pomegranates. Soothed by the Buddha’s compassion, she acquired a gentler nature and became the patron goddess of children. She is sometimes depicted holding a pomegranate in one hand a suckling a baby with the other.

GREECE: as a fertility symbol, the pomegranate was strongly associated with Aphrodite, the goddess of love, as well as Dionysus, the god of wine, pleasure and merriment. The most famous appearance of the pomegranate in Greek mythology is in the story of Hades and Persephone. Hades kidnapped Persephone, daughter of the fertility goddess Demeter, and made her his queen in the Underworld. Demeter was so upset about her daughter’s fate that she refused to allow any crops to grow on the earth, and people began to starve. When Hades was ordered to release Persephone, he complied, but before she returned to her mother, Persephone had eaten a number of pomegranate seeds (the number varies depending on which version of the story you hear). Since pomegranates were the fruit of the Underworld, this bound Persephone to her husband and required her to spend a certain part of every year with him, which resulted in the cold and barren seasons on earth (i.e. winter), since her mother Demeter was in a state of mourning at this time.

JUDAISM: pomegranates appear many times in the Old Testament: The robes of the High Priest of the Temple of Jerusalem were embroidered with them; the fruit’s association with fertility earned it a place in the famous Song of Solomon; and the Book of Deuteronomy describes pomegranates as being one of seven key crops associated with the land of Israel (along with wheat, barley, grapes, figs, olives and dates). One tradition claims that the pomegranate has exactly 613 seeds, corresponding with the total number of commandments, or mitzvot, in the Torah. Even in Israel today, pomegranate imagery is fairly common and can be seen throughout the country, demonstrating the survival of this potent symbol.

ROME: in ancient Rome, the status of the pomegranate as a fertility symbol was on full display. Not only was its juice a popular cure for infertility, but wreaths and crowns woven from pomegranate leaves were often worn by brides at wedding celebrations, the implication obviously being an expectation of children.

SPAIN: the city of Granada in southern Spain, famous as the country's last stronghold of Islamic rule in the 15th century, has a curious association with the pomegranate. Not only does it appear on the city’s flag and coat of arms, but the Spanish-language word for pomegranate is, in fact, “granada”, indicating a strong symbolic link. Even after the Muslim rulers were exiled from the city in 1492, the symbolism of the pomegranate remained strong among the local population. For example, when Katherine of Aragon left Spain to marry into the royal family of England, she chose the pomegranate as her personal heraldic device.

Pomegranate is part of the Buddhist Symbols, Jewish Symbols groups.

Have a discussion about Pomegranate with the community: