What's the meaning of the Apple »

This page is about the meaning, origin and characteristic of the symbol, emblem, seal, sign, logo or flag: Apple. 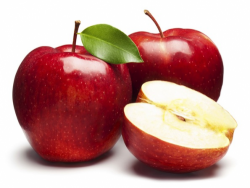 One of the most symbolic of all fruits, apples have held a central place in the traditions of many cultures.

With its rounded shape and (in most cases) red coloring, the apple is a clear symbol of fertility, a quality it shares with many other fruits. Some cultures also give apples an association with the divine. This association can take various forms, but typically it connects to something beyond the realm of humanity.

-In the Book of Genesis, Adam and Eve are exiled from the Garden of Eden after defying God's command by eating the Forbidden Fruit. Although the Bible does not actually say what kind of fruit this was, later interpretations of Biblical texts often give it the form of an apple. This is possibly an allusion to the apple’s symbolism as a sensuous object, which ties in with Adam and Eve’s newfound shame at their nakedness.

-In Celtic lore, apples are considered the fruit of the Otherworld, a religious concept that refers to places outside the domain of humans.

-The legends of King Arthur feature an island called Avalon, where, after being wounded in a fierce battle, the King is taken by fairy women to rest and heal. The name Avalon translates as “island of apples”.

-The Chinese consider the apple blossom to be a symbol of femininity.

-In Greek mythology, the golden apples of the Hesperides were given to the goddess Hera as a wedding gift from the earth mother Gaia and conferred immortality on those who consumed them.

-After being snubbed on an invitation to a wedding, Eris, the goddess of discord, inscribed a golden apple (known as the Apple of Discord) with a Greek word meaning “for the fairest” and tossed in between the goddesses Hera, Athena and Aphrodite. This seemingly innocuous event triggered a competition that would ultimately led to the bloodshed and tragedy of the Trojan War.

Have a discussion about Apple with the community: