What's the meaning of the Bear »

This page is about the meaning, origin and characteristic of the symbol, emblem, seal, sign, logo or flag: Bear. 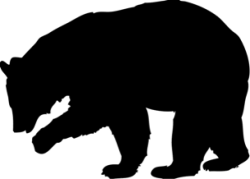 Even if they’ve never seen one in person, most people have probably come across bears, whether through movies, nature documentaries, children's characters or even stuffed animals. In any case, the human fascination with this animal is a truly ancient phenomenon, stretching back thousands of years and found in the traditions of many different cultures.

Since the majority of all known bear species are found in the northern hemisphere, the cultures of that region is where the symbolism of the animal is most prominent. Before moving onto specific cultural examples, however, let’s discuss a few of the bear’s general symbolic associations. One of the best-known habits of many bear species is hibernation; they essentially sleep through the winter and emerge from their dens once the spring thaw has occurred. This relatively straightforward phenomenon led to the bear being associated with resurrection and the coming of new life, meanings also typical of the spring season itself.

Other symbolic meanings of the bear require even less imagination to appreciate; given their sheer size (they are the largest land animals in many areas) and potential to maul and kill, they are a major symbol of strength and power. In a way, bears may also be considered symbols of protection, as the females can become extremely aggressive when they sense their cubs are in danger. Finally, due to certain physical traits- they can walk upright, have an omnivorous diet and can be highly intelligent- bears have also been viewed as somewhat akin to human beings. Although such a notion may not carry the same weight as it once did, ideas like this formed the basis of some of the bear's most important symbolic associations:

AINU: traditionally centered on Hokkaido, the northernmost island of the Japanese archipelago, the Ainu considered the bear a sacred animal and even revered it as an ancestor. The culture also once practiced a ceremony known as Iyomande, or “sending home”. In this ritual, the people adopted and raised bear cubs for a number of years as if they were children. Afterwards, the cubs were ritually sacrificed and their flesh consumed. Although such a ceremony may seem cruel to the more environmentally conscious minds of today, other cultures, notably various groups of Native Americans, also consumed bear flesh, the Ainu themselves believed that when the cubs ‘returned home’, they would carry the prayers and wishes of the people to their spirit parents, so there was an important religious aspect to the practice.

CELTS: as a proud, warlike people, the Celts fully appreciated the "talent" of the bear; they admired its power and physical strength and considered the bear to be an appropriate symbol for warriors. In the legends of King Arthur, which have strong Celtic overtones, other aspects of the bear's nature are also on display; according to the stories, after his last fierce battle, Arthur was gravely wounded and, in the company of fairy women, was taken to the island of Avalon to rest and heal. Like a bear in hibernation, it is said that Arthur still “sleeps” on that island and will return when Britain has need of him. In fact, the Welsh word for bear, “arth”, carries the same root as “Arthur”, further emphasizing the connection between the animal and the king.

GREEKS: in ancient Greek mythology, the bear makes a number of significant appearances. Artemis, in her capacity as goddess of the hunt and forest, is sometimes associated with the bear, and the nymph Callisto, who was part of Artemis’ entourage, also has an association with the animal. After being raped by Zeus, and subsequently banished from Artemis’ side, Zeus’ jealous wife Hera transformed Callisto into a bear as revenge for her husband’s infidelity. Callisto’s son by Zeus, Arcas, became a noted hunter in his own right and one day encountered the bear that had once been his mother. He was about to strike her down when Zeus took pity on both of them and raised them into the sky, where they were transformed into the constellations of Ursa Major and Ursa Minor, or Great Bear and Little Bear.

SAMI: these people, formally known as Lapps or Laplanders, traditionally occupied areas in what are now Northern Finland, Russia and other parts of Scandinavia. The bear is one of the most important animals in traditional Sami culture; like the Ainu, not only do the Sami consider the bear to be an ancestor figure, but also certain rituals within the culture demonstrate the animal’s significance. In the case of the Sami, bear graveyards existed in which the creature’s bones were laid out with great care and reverence in the hope that they would one day return.

Have a discussion about Bear with the community: