What's the meaning of the Snake »

This page is about the meaning, origin and characteristic of the symbol, emblem, seal, sign, logo or flag: Snake. 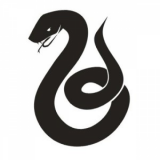 It's not much of an exaggeration to say that snakes are the most symbolically charged members of the entire animal kingdom. All across the world, snakes have occupied the entire spectrum between reverence and hatred. What is particularly notable about snakes (although not unique by any means) is that they can be both admired and feared in the same culture without one symbolic facet canceling out the other. Whether they're seen as the embodiment of evil or as the repository of ultimate wisdom, the cultural importance of these creatures cannot be overstated.

A complete inventory of the snake's symbolic meanings would fill an entire book (if not more), so this article will present as wide a range as possible by using bullet points to denote specific examples. There are, however, some general connotations to snakes that should be understood first:

One of the best-known habits of many snakes is that they periodically shed their skin. While seemingly innocuous, this phenomenon has given snakes a strong link to regeneration and renewal (i.e. casting off the old in favor of the new). The shape of the snake's body gives it distinctive phallic- and therefore sexual- attributes. On the other hand, there are also plenty of instances where snakes have been associated with female entities- sexually or otherwise. Because many snake species prey on rodents, one of the primary enemies of crop fields, they have been held up as symbols of agricultural fertility. Finally, there is something almost primal about snakes; since their bodies are constantly pressed against the earth- and in many cultures they are also associated with water- snakes maintain a close relationship to the elemental powers of nature. As such, they frequently play a part in creation stories and are often associated the underworld:

-Aido Hwedo (sometimes Don Aido Hwedo, spellings vary) is the cosmic serpent of West African folklore. The Fon people tell how he partnered with the god Mawu to create the Earth, its features, and living beings. When Mawu was afraid the earth would collapse under its own weight, Aido Hwedo coiled his massive body around the planet to hold it upright. He is also associated with rainbows, which are said to be his coils.

-The Rainbow Serpent is a common figure in many stories of the Aborigines. Depending on the tribe, the serpent may be male or female, and the stories can vary quite widely from group to group.

-The Book of Genesis tells how the serpent in the Garden of Eden tempted Adam and Eve to eat the Forbidden Fruit, leading to their banishment from Paradise and cementing the evil reputation of the snake in Western culture.

-The Leviathan is a serpent whose body is so large that it wraps around the entire world. Associated with destruction, it is said that should this creature ever reach its own tail with its mouth, the world will end.

-According to Chinese folklore, a goddess called Nu Gua- whose lower body consists of a serpent's tail- is said to have sculpted the first human beings out of clay.

-The snake is also the sixth animal in the Chinese zodiac. People born in the year of the snake are supposedly clever and self-reliant with a tendency towards deep-thinking.

-The Egyptian cobra was associated with royalty and often appeared on pharaoh's crowns as a symbol of protection (sometimes paired with a vulture).

-The serpent Apep (Apopis to the Greeks) was associated with darkness, chaos, and destruction. The enemy of the sun god Ra, Apep regularly threatened Ra's daily journey across the sky. A solar eclipse indicated that he had swallowed the sun.

-A famous statue from the Minoan civilization of Bronze-age Crete- popularly called the "snake goddess" and currently housed at the Heraklion Archaeological Museum- displays a female figure clutching a snake in each hand.

-Asclepius, the god of medicine, carries a tall staff with a snake wound around it, giving the creature an association with healing. This "Rod of Asclepius" has also been adopted by modern medical trades as a sign or logo.

-Medusa, the most famous of three creatures known as the "gorgons", is typically portrayed with hair made entirely of live snakes.

-Hermes/Mercury, the messenger god, carries an instrument known as the caduceus, a staff topped with a pair of wings and entwined with two serpents (Note: the caduceus is often confused with the rod of Asclepius - see above - but they are different symbols).

-In the Hindu creation story, an uprooted mountain is placed upside-down and a thousand-headed serpent called Vasuki is coiled around it. By repeatedly pulling on one end of the serpent and then the other- a kind of celestial tug-of-war- the gods churn the cosmic ocean and create Amrita, the elixir of immortality.

-Hinduism and Buddhism both feature a group of beings known as Nagas, who are portrayed either as serpents or some combination of serpent and human. Among other things, Nagas are strongly associated with water, fertility, and the Underworld.

-Artistic depictions of the god Shiva- who embodies both creation and destruction- often portray him with with a cobra or other similar snake.

-According to Aztec legend, it was after seeing an eagle perched on a cactus with a serpent in its mouth that the location of Tenochtitlan- which would become the capital of the empire- was decided upon. Tenochtitlan is now modern-day Mexico City and the eagle-cactus-serpent symbol is the centerpiece of the Mexican national flag.

-The feathered serpent deity was worshipped in varying forms by Mesoamerican peoples (known as Kukulcan to the Maya and Quetzalcoatl by the Aztec) and emboided numerous different virtues. These included the morning star, wind, maize cultivation and the arts among others.

-The Aztec earth goddess Coatlicue is typically portrayed wearing a garment woven out of snakes. In fact, her name translates as "she of the serpent skirt".

-In present-day Ohio there exists an immense earthwork constructed by native peoples over 4000 years ago. Since it resembles a snake the work is commonly referred to as the "serpent mound"

-The Pueblo people of the American southwest associate snakes with lighting and thunder, and use instruments called snake sticks- named for their resemblance to the creatures- to summon rain.

-Norse mythology speaks of Jormungand, also known as the Midgard Serpent. Archenemy of Thor, the god of thunder, Jormungand lives beneath the ocean and surrounds the world with its coils.

-Nidhogg is a monstrous serpent who continually gnaws at the roots of Yggdrasil, the World Ash Tree. He is based in Nastrond - an area of Niflheim, the Norse Underworld - and has a perpetual rivalry with an eagle who roosts in Yggdrasil's branches.

The formal writing system used by the ancient Egyptians that contained a combination of logographic and alphabetic is called hieroglyphics. They began to develop this system around 3000 BC.The first … read more »

Have a discussion about Snake with the community: