What's the meaning of the Saffron »

This page is about the meaning, origin and characteristic of the symbol, emblem, seal, sign, logo or flag: Saffron. 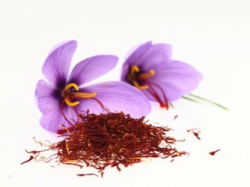 Saffron is a spice with both culinary uses and symbolic importance. Difficult to find and time consuming to gather and process, it was highly prized by many cultures and has acquired a number of important meanings over the centuries.

Throughout history, spices have been among the world’s most sought after trade goods, at certain periods worth their weight in gold. The main reason for the high value of saffron was twofold:

1) The small thread-like bits that make up saffron are in fact the stamens of single species of crocus flower, known as the Crocus sativus.

2) Each blossom typically contains only three stamens, so gathering any substantial amount of the spice was a laborious and expensive exercise.

Although saffron was - and still is - used in many cuisines, it was also used to create a rich golden-yellow coloring dye, and in this context is where we find many of its symbolic meanings:

Moving east, specifically to India and other parts of Asia, saffron took on a distinctly different set of meanings. The robes of certain Buddhist monks and nuns are dyed using saffron, the color symbolizing renunciation and humility. Saffron also carries meaning in other Indian religions (Hinduism, Jainism and Sikhism); saffron or orange colored flags indicate a place of worship, and saffron paste is used as adornment in certain Hindu ceremonies.

In Bhutan, a small country nestled in the Himalayan mountains, saffron is once again associated with royalty. Traditional men's clothing - known as the gho - is sometimes accessorized with a long silk scarf called a kabney. The kabney comes in a variety of colors, and national law stipulates which colors can be worn by individuals, depending on his profession and position in society. A saffron-colored kabney may be worn only by two men; the King of Bhutan and the Je Khenpo, or chief abbot.

Have a discussion about Saffron with the community: