What's the meaning of the Superman Shield »

This page is about the meaning, origin and characteristic of the symbol, emblem, seal, sign, logo or flag: Superman Shield. 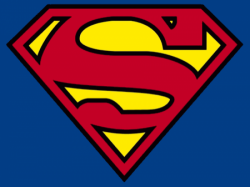 The Superman shield, also known as the Superman logo, is the iconic emblem for the fictional DC Comics superhero Superman. As a representation of one of the first superheros, it served as a template for character design decades after Superman's first appearance. The tradition of wearing a representative symbol on the chest was mimicked by many subsequent superheroes, including Batman, Spider-Man, the Fantastic Four, Green Lantern, the Flash, Wonder Woman, Hawkman, and many others.

In its original inception in Action Comics #1, Superman's symbol was a letter S with red and blue on a yellow police badge symbol that resembled a shield. The symbol was first changed a few issues later in Action Comics #7. The shield varied over the first few years of the comics, and many times was nothing more than an inverted triangle with an S inside of it.

The shield first became a diamond in the Fleischer cartoon serial Superman. It was black with a red S outlined with white (although it was on occasion, outlined with yellow). The S has varied in size and shape and the diamond shape containing it has also changed size and shape. Extreme examples of this would be the very large logo on the Dean Cain costume from the television series Lois & Clark: The New Adventures of Superman and the comparatively small version of the shield as depicted in the 2006 film Superman Returns. It has, in most incarnations, retained its original color, while changing shape here and there. The classic logo is the basis for virtually all other interpretations of the logo.

In the mid-1990s, when Superman's costume and powers changed briefly, during the "Superman Red/Superman Blue" comic book storylines, the shield changed colors and slightly changed shape, in accordance with the changes in the costume. In 1997's Superman Vol 2 #123 Superman's new powers forced him to find a suit that was capable of containing his new abilities. The effective material found to create Superman's suit, along with being blue and silver, was also courtesy of Lex Luthor. Not only did the colors and powers change, the logo also evolved into a re-imagined "electric" emblem. In the miniseries Kingdom Come, an aged Superman sported an S-like symbol against a black background in a red pentagon.

In the 2000s TV series Smallville, the S symbol originally appeared as a diamond with a vertical infinity symbol (to be similar to the S), in an attempt to make it seem more alien. However, beginning with the Season Six opening episode "Zod," Clark is given a crystal bearing the S logo in the style of the Superman Returns logo and is seen several times throughout the series and specifically in the season finale when a beam shaped like the logo hits a Phantom Zone escapee. The logo also appeared in the first episode of the series, when the students captured Clark by giving him a kryptonite necklace (which they didn't know was a weakness) and tied him to a cross-like beam in a cornfield and painted a red 'S' on Clark's chest (standing for Scarecrow, which was what he was meant to be as part of a high school hazing tradition) as a reference.

Initially, the S-shield had one meaning: S for Superman. One of the first alternative meanings was presented in Superman: The Movie, in which it was not an S, but rather the S-shaped Coat of arms of the House of El. After the Superman reboot story The Man of Steel, the symbol's story was that it was designed by Jonathan Kent and was derived from an ancient Native American symbol. The symbol was featured on a medicine blanket given to an ancestor of the Kent family by a Native American tribe after he helped to cure them of a plague and was supposed to represent a snake, an animal held to possess healing powers by the tribe (implying that, by wearing this symbol, Superman was a metaphorical healer). In 2004, Mark Waid's Superman: Birthright series says the S-Shield is the Kryptonian symbol for "hope" and Superman believes it may have begun as a coat of arms for the House of El. Later, writer Geoff Johns confirmed it was indeed a coat of arms, as well as a symbol for hope. In the 2013 film Man of Steel, when asked by Lois Lane what the "S" stands for, Superman states that it is not an "S", but rather the Kryptonian symbol for "hope".

Have a discussion about Superman Shield with the community: