What's the meaning of the Saint John's Arms »

This page is about the meaning, origin and characteristic of the symbol, emblem, seal, sign, logo or flag: Saint John's Arms. 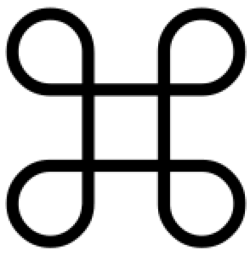 Saint John's Arms, a.k.a Cross of St John and Viking magic ideogram, used today in cartography and as traffic sign for ancient remains.

⌘ is a square with loops at the corners. It is referred to as Saint John's Arms, the Place of Interest Sign, the Saint Hannes cross, or Looped Square, and is an ancient symbol that remains in common use. It is this symbol that in Scandinavia is called valknute.

The symbol appears on a number of old objects in Northern Europe. It features prominently on an image stone from Hablingbo, Gotland, Sweden that was created between 400 and 600 AD.

It is also similar to a traditional heraldic emblem called a Bowen knot.

In Finland, the symbol was painted or carved on houses and barns, and domestic utensils such as tableware, to protect them and their owners from evil spirits and bad luck. The oldest surviving example is a pair of 1000-year-old wooden skis (Finnish pre-Christian period) decorated with the symbol.

The looped square also appears on artifacts of the Mississippian culture of the southeastern United States.

In modern times, the symbol is commonly found in Belarus, Denmark, Estonia, Finland, Germany, Iceland, Lithuania, Norway, and Sweden as an indicator of cultural locations, first in the Scandinavian countries since the late 1960s.

The symbol later gained international recognition via computing. It is used on Apple keyboards as the symbol for the command key.

In Unicode, it is encoded at U+2318 ⌘ place of interest sign (HTML: ⌘) in block Miscellaneous Technical.

Have a discussion about Saint John's Arms with the community: