What's the meaning of the Pepsi Globe Symbol »

This page is about the meaning, origin and characteristic of the symbol, emblem, seal, sign, logo or flag: Pepsi Globe Symbol.

The Pepsi Globe is the name of the logo for Pepsi, called as such because of the swirling "red, white, & blue" design in a sphere-like shape. It is considered one of the world's most recognizable corporate trademarks.

The Pepsi Globe has its origins in the 1940s, when the United States was in World War II. To show support of the war, Pepsi unveiled a new bottle cap that featured the Pepsi script surrounded by swirling red and blue colors on a white background. Since Pepsi, at the time, was recognizable with its script logo in the same manner as its main rival, Coca-Cola, the cap logo was simply meant as a show of U.S. patriotism as opposed to a marketing scheme.

The cap logo, however, quickly caught on, and by the end of the war in 1945 became Pepsi's primary logo. With Pepsi gaining ground on Coke in the 1950s, the logo became so recognizable that by the time the Pepsi logo was redesigned in 1962, the swirling "red, white, & blue" bottle cap that would eventually evolve into the Pepsi Globe would remain while the script was retired in favor of a more-modern "Pepsi" typeface.

In 1991, the logo was updated again, and for the first time in the half-century existence of the Pepsi Globe, no typeface of any kind would be in the white section of the Pepsi Globe on a regular Pepsi product. Instead, the red bar would be lengthened slightly (the light-blue bar was dropped altogether) and the Pepsi script was moved on top of the Pepsi Globe and red bar.

Pepsi logo (2005–08). Initially, the "Pepsi" script was written across the top of the globe. In 2007 when the packaging was again redesigned, the script was moved below the globe. It was used in countries outside the US until 2010.

In 1997, the red bar was dropped altogether as Pepsi adopted blue packaging (replacing white), while enlarging the Pepsi Globe and making it three-dimensional. This was the first official use of the logo as the "Pepsi Globe". The design was refined in late-2004/early-2005 when the typeface was updated and the Pepsi Globe became more realistic-looking. This version of the logo essentially remained the same in 2007 when Pepsi redesigned the packaging once more to show different backgrounds on each can, though the color remained blue.

In 2008, cans started to have a background color (font color for Diet version) based on the type of version. Caffeine Free Pepsi reverted to its gold background, cherry consists of red on top while blue on bottom, and the light blue Diet Pepsi returned to silver. But the regular Pepsi introduced in 1898 continues to acquire the blue background.

In October 2008, Pepsi announced it would be redesigning its logo and re-branding many of its products. Pepsi, Diet Pepsi and Pepsi Max use all lower-case fonts for name brands, Mountain Dew has been renamed "Mtn Dew," and Diet Pepsi Max has been re-branded as Pepsi Max, because the original 1993 version is no longer available in the United States. The new imagery has started to be used. The new lower-case font used on Pepsi's products are reminiscent of the font used in Diet Pepsi's logo from the 1960s to the mid-1980s.

With the new packaging saw the Pepsi Globe get its biggest redesign since 1991 when the "Pepsi" wording was removed from the white area of the logo. The white area became a series of "smiles", with the central white band arcing at different angles depending on the product until mid-2010. Regular Pepsi has a medium-sized "smile", while Diet Pepsi had a small "grin". Pepsi Max's variant was the most different, using a large "laugh" and also used black in the bottom half of the globe as opposed to the more standard royal blue. In July 2010, Diet Pepsi, Pepsi Max, and all other Pepsi variants (except Pepsi ONE) began using the regular "smile" logo as it was redesigned to match the global branding. Pepsi Wild Cherry continued to use 2003 Pepsi design until late March 2010.

The new Pepsi design was unveiled in Canada in 2009. It was then released in other countries outside the US in 2010 such as France and the UK, meaning the 2003 design was phased out completely. In the UK, the current "smile" logo features the globe in the center, and the "Pepsi" text below it, as opposed to the tilted text in the US.

As of 2012, the only Pepsi product not using the redesigned Pepsi Globe is Pepsi Throwback. Throwback deliberately uses retro packaging due to the drink using an older formula of Pepsi containing sugarcane instead of high-fructose corn syrup that is more commonly found in soft drinks today. Pepsi ONE previously used the 2005 logo until 2012, when it adopted the current smile logo. 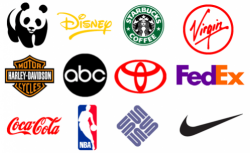 Have a discussion about Pepsi Globe Symbol with the community: