What's the meaning of the House Baratheon of Dragonstone »

This page is about the meaning, origin and characteristic of the symbol, emblem, seal, sign, logo or flag: House Baratheon of Dragonstone. 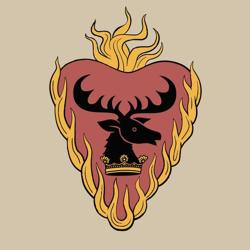 The sigil of House Baratheon of Dragonstone from Game of Thrones.

The continent of Westeros is made up of many different regions, each of which has its own culture and history. Most of these regions form constituent parts of a single political realm, which is presided over by a ruling monarch. While they hold ultimate power over the realm, local governance of each region is handled by a “Great House”, a noble family whose members answer directly to the monarch. House Baratheon is one of these Great Houses, and at the beginning of the series, they are also the royal house, having seized the throne from Aerys II, the last king of the Targaryen dynasty, seventeen years prior to the series beginning.

After the death of King Robert Baratheon at the end of season one, it was widely rumored that he never had any legitimate children. Due to this uncertainty, numerous political factions emerged, all claiming rightful inheritance of the throne. One of these factions was led by Stannis Baratheon, Robert’s younger brother and lord of the island fortress of Dragonstone. His personal sigil consisted of a black stag’s head on a red heart, encompassed by yellow flames. The black stag is the traditional emblem of the Baratheons (for full details, see the symbol for ‘House Baratheon’), while the fiery heart represents Stannis’ conversion to the faith of the Lord of Light, a religion popular on the continent of Essos but with very few followers in Westeros.

In addition to his own sense of political righteousness, it was this religious devotion that spurned Stannis to claim the throne with such passion and determination: he truly believed that the Lord of Light had chosen him to be the rightful ruler and that all who opposed him were his enemies. While this mindset carried Stannis far in his attempts to claim the throne, it ultimately proved to be his own destruction as well- his defeat and death at the end of season five represented the official extinction of House Baratheon of Dragonstone.

House Baratheon of Dragonstone is part of the Coat of Arms group.

Have a discussion about House Baratheon of Dragonstone with the community: