What's the meaning of the Greyjoy bastard »

This page is about the meaning, origin and characteristic of the symbol, emblem, seal, sign, logo or flag: Greyjoy bastard. 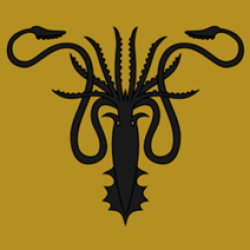 The sigil of a bastard born to House Greyjoy in Game of Thrones.

The continent of Westeros is made up of many different regions, each of which has its own culture and history. Most of these regions form constituent parts of a single political realm, which is presided over by a ruling monarch. While the monarch holds ultimate power over the realm, local governance of each region is handled by a “Great House”, a noble family whose members answer directly to the sovereign. House Greyjoy is one of these Great Houses, and their sigil is a golden kraken on a field of black (for full details, see the symbol for ‘House Greyjoy’).

On The Iron Islands, noble-born bastards are given the surname “Pyke” in reference to the stronghold of the region’s governing family, located on an island also called Pyke. If the bastard happens to be descended from House Greyjoy, their sigil would be a black kraken on a golden field.

Greyjoy bastard is part of the Coat of Arms group.

Have a discussion about Greyjoy bastard with the community: