What's the meaning of the Duke University Seal »

This page is about the meaning, origin and characteristic of the symbol, emblem, seal, sign, logo or flag: Duke University Seal. 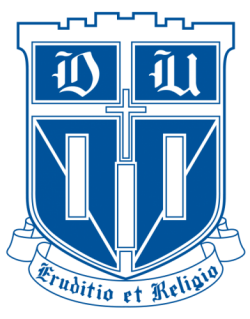 The history of the seal and motto of Duke University has been mercurial with an unpredictable changeableness through the years. With the adoption of a shield, primarily for marketing, the official seal is not as visible as it used to be. However, the seal is carved in stone at several places on both East and West Campus. The seal is circular with Duke University in Latin and the motto, Eruditio et Religio, around the outer edge. The interior design consists of a wreath composed of two different kinds of leaves with a cross with rays of light behind it in the center.

There is no official record of the adoption of the seal even though the use of one is authorized by the charter of 1851. The earliest extant examples of the seal are on diplomas in 1869 and a bank loan in 1883. The first printed representation of the seal and motto is on an invitation to the commencement exercises of 1889. An early institutional history by Bruce Craven, grandson of President Braxton Craven, notes that President Craven selected the motto in 1859 at the time the name of the college was changed to Trinity. Braxton Craven stated that "for a church college, the name Trinity included everything that a church college ought to stand for, and that with the motto, formed a consistent plan of Christian education."

The motto "Eruditio et Religio" most probably originated from a Methodist hymn by Charles Wesley, brother of John Wesley, the founder of Methodism. Titled "Sanctified Knowledge" in the contemporary pre Civil War hymnal, the third stanza begins "Unite the pair so long disjoined, Knowledge and vital piety . . . ." Further proof that the hymn was well known by the founders of the college is that another phrase from the hymn, "ignorance and error," appears in the preamble of the constitution of Union Institute, a name of the institution before it became Trinity College. The desire to join education and religion in a common endeavor is not at all surprising when one remembers that Methodism originated on the campus of Oxford University when John and Charles Wesley were students, and that one of the worldwide legacies of the Methodist Church is the founding of institutions of higher education. In North Carolina the most prevalent form of higher education was sponsored by the church. The Methodists, Baptists, Presbyterians and Quakers each founded institutions known today as Duke University, Greensboro College, Wake Forest University, Davidson College, and Guilford College in the 1830s.

The first reference to the seal in the minutes of the board of trustees is a curious handwritten note dated May, 1888, by the new president, John Franklin Crowell. Crowell emphatically stated that the Latin on the existing seal was indefensible and that he would not sign a diploma using it as "it would be a reflection on my scholarship." This comment was followed with the bold command, "Get a new seal." After the change of name to Duke University in 1924, the Latin inscription read Sigillum Universitatis Dukensis which was changed again in 1957 to Universitas Dukiana. Apparently the designers of the seal have had difficulty agreeing on the proper Latin through the years.

President Douglas M. Knight initiated a study of university symbols in 1964 which implemented far reaching changes. A committee consisting of representatives from the medical center and the art department composed an official shield designed for use on a variety of commercial products where the seal was thought to be inappropriate. The shape of the shield is patterned after the Duke family crest with the notched top inspired by the roof lines of the Gothic architecture of West Campus. A triangle, the symbol of unity and the Trinity, is incorporated within the borders of the shield, with the theme further emphasized by the repetition of three vertical bars representing education, religion, and health. This is the first time the concept of health is visually introduced in a university symbol. The motto is repeated on a ribbon beneath the shield. With the approval of the new shield, the seal was reserved for use only by authorization of the board of trustees. Additional committees at the same time recommended the design of a Duke flag, the designation of an official shade of Duke blue, the authorization of an official distinctive Duke doctoral cap, gown and hood, and the design of an official chain of office and mace (right) for use by the president.

The aims of the university date from bylaws prepared by President John C. Kilgo at the request of the board of trustees in 1903. When Trinity College became the undergraduate school of the new institution, Duke University, in 1924, the aims, motto and seal of the college were adopted and thus continued by the university. The aims of the university are most prominently displayed on a bronze plaque in the main quadrangle of West Campus which was a gift of student and alumni members of The Order of Red Friars, a local honorary society. The plaque was dedicated at Homecoming Weekend in 1942.

In 1993 the university telephone directory had on its cover a striking color photograph of the pediment above the entrance to Baldwin Auditorium on East Campus which depicted the seal of the university. Taken with a telephoto lens the close up image of the motto revealed the stonecutter's misspelling of the Latin word Religio! Thus a permanent reminder of the difficulty with the Latin in the official seal through the years is displayed for all to see. The prominent cover touched off a flurry of correspondence in the Chronicle over the "newly discovered" seal of the university. Some writers thought it to be politically incorrect while others defended it as quite appropriate. Also many references over the decades have attributed the origin of certain university symbols to either Washington or James B. Duke. What we know of the origin of the seal, motto and aims of the university are attributable to the actions of the board of trustees in the context of the total history of the institution from its inception in 1838. Discussion is always welcome about university symbols but it should be based on an accurate understanding of the institution's history.

Symbols, flags, seals and logo universities and colleges from all over the world read more »

Have a discussion about Duke University Seal with the community: