What's the meaning of the Druze Star »

This page is about the meaning, origin and characteristic of the symbol, emblem, seal, sign, logo or flag: Druze Star. 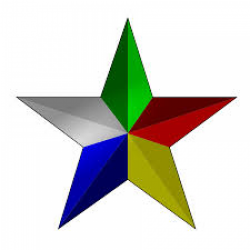 A symbol such as this one might not look out of place at a child’s birthday celebration, but it is in fact the emblem of a relatively obscure religion that possesses a rich and eclectic cultural history.

With a following of approximately one million people- mostly centered in Syria, Lebanon, Jordan and Israel- the Druze faith came into existence under the Fatimid Caliphate in 11th century Egypt. Muhammad bin Ismail Nashtakin ad-Darazi, one of the first major figures in the development of the faith, was a preacher of “Ismailism”, an offshoot of Shia Islam with a distinct philosophical bent. Although Druze is primarily rooted in Ismailism as well as mainstream Islam, it also incorporates principles from Judaism and Christianity, and includes tenants of Ancient Greek philosophy. This blending of traditions has resulted in a diverse belief system that covers many aspects of the worshipper’s lives.

In essence, Druze is a strongly monotheistic faith that places high value on moral behavior and is notable for its distinctive lack of elaborate ceremonies or rituals. Despite their embrace of traditions from many belief systems, however, Druze remains, overall, a tight-knit spiritual community. Conversion to or from other religions is not allowed, along with marriage to people outside the faith. On the other hand, outside information regarding Druze customs is fairly common, as throughout their history the Druze have been witness to many significant events, from the Crusades, to wars of the Ottoman Empire to the Arab-Israeli conflicts of the 20th century.

Each colored section of the Druze Star has a number of symbolic associations that it shares with the matching colors of another related symbol, the Druze Flag:

Have a discussion about Druze Star with the community: