What's the meaning of the Buffalo Bisons Logo »

This page is about the meaning, origin and characteristic of the symbol, emblem, seal, sign, logo or flag: Buffalo Bisons Logo.

The Buffalo Bisons are a professional minor league baseball team based in Buffalo, New York. They play in the International League (IL) and are the Triple-A affiliate of the Toronto Blue Jays. The Bisons play at Coca-Cola Field in downtown Buffalo.

The Bisons have existed in some form since 1877, most of that time playing in professional baseball's second tier; exceptions have included the 1879–85 Bisons, who played in the major leagues as a member of the National League, and the 1979–84 Bisons, who played at the third-tier Double-A level. The Bisons did not play from June 1970 through the 1978 season.

In 2016, Forbes listed the Bisons as the 15th-most valuable Minor League Baseball team with a value of $34 million.

After the 2008 season, Buffalo parted ways with Cleveland, as the Indians signed an affiliation agreement with the Columbus Clippers beginning in 2009. The Bisons then signed a two-year agreement to be the top home for New York Mets prospects.

On December 16, 2008, the Mets officially announced that Ken Oberkfell would be the Bisons new manager for 2009. At the same press conference, the Bisons also unveiled their new logo. The logo paid homage to baseball's history in the city of Buffalo with the city's skyline in the background. The logo, along with the new colors of blue and orange, closely resemble that of the team's new parent club, the Mets.

In late July 2010, the Bisons and Mets agreed on a two-year extension that carried their agreement through the 2012 season.

The 2010–2011 off-season saw changes to the Bisons coaching staff. Ken Oberkfell was replaced by Tim Teufel, who was a member of the 1986 Mets team. Teufel was introduced on Friday January 21, 2011, as the 16th manager in the Bisons' modern era.

The 2011–2012 off-season once again saw coaching changes. Tim Teufel was replaced by Wally Backman. He was introduced on November 17, 2011.

Buffalo Bisons Logo is part of the International League group. 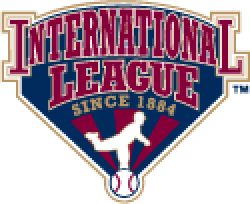 The International League (IL) is a Minor League Baseball league that operates in the eastern United States and is headquartered in Dublin, Ohio. Like the Pacific Coast League and the Mexican League, … read more »

Have a discussion about Buffalo Bisons Logo with the community: