What's the meaning of the Antarctic Tartan »

This page is about the meaning, origin and characteristic of the symbol, emblem, seal, sign, logo or flag: Antarctic Tartan. 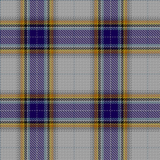 This tartan was authorised by the British Antarctic Survey (BAS) to raise funds for the UK Antarctic Heritage Trust. Designed by Rosalind Jones of Celtic Originals, the colours chosen all represent different aspects of the continent’s landscape and inhabitants:

•White represents the ice-covered continent, ice flows, and the edge of the Antarctic Ocean.

•Orange represents lichen and the plumage of Emperor and King penguins (specifically their heads).

•Black and white together represent penguins and whales.

The design is based upon the Antarctica’s unique geography:

•The square of white at the edge of the sett represents the light of the Antarctic summer sun on the ice-covered continent. This is quartered by threads of pale blue. These represent the 0 / 360, 90, 180, and 270 lines of longitude. The point where they cross represents the South Pole.

•Two bands of grey surrounding the white heart represent nunataks, mountain ranges, and exposed coastal rocks. Much of Antarctica's life forms are found around the coast, so the colours that follow in the sett, orange, yellow, black and white, represent the wealth of animal life on land and in the seas.

•Orange also represents the lichens that encrust the rocks. Surrounding the land, pale blue and white depict the ice shelves whilst the outside is edged by bands of midnight blue for the ocean deeps and dark winters.

•Each sett is separated by a thin band of white that represents the edge of Antarctica. Where these cross, the Southern Cross is depicted. This viewed diagonally also represents the Scottish saltire, a tribute that in 2001 marked the centenary of Scott's first expedition to the Antarctic in 1901. The tartan is sold in several parts of the world -including Port Lockroy in Antarctica.**

Have a discussion about Antarctic Tartan with the community: