What's the meaning of the Menorah »

This page is about the meaning, origin and characteristic of the symbol, emblem, seal, sign, logo or flag: Menorah. 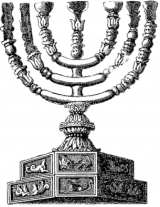 The menorah (Hebrew: מְנוֹרָה‎ [mənoːˈɾaː]) is described in the Bible as the seven-lamp (six branches) ancient Hebrew lampstand made of gold and used in the portable sanctuary set up by Moses in the wilderness and later in the Temple in Jerusalem. Fresh olive oil of the purest quality was burned daily to light its lamps. The menorah has been a symbol of Judaism since ancient times and is the emblem on the coat of arms of the modern state of Israel.

The menorah willow consisted of a base and a shaft with six branches, beaten out of solid gold. The six branches curved to the height of the central shaft so that all seven lamps at their apexes were in a straight line.

The Hebrew Bible, or Torah, states that God revealed the design for the menorah to Moses and describes the construction of the menorah as follows (Exodus 25:31-40):

The branches are often artistically depicted as semicircular, but Rashi may be interpreted as saying they were straight, and Maimonides, according to his son Avraham, held that they were straight; other authorities, including Ibn Ezra, say they were round.

Archaeological evidence, including depictions by artists who had seen the menorah, indicates that they were neither straight nor semicircular but elliptical.

Until 2009, the earliest preserved representation of the menorah of the Temple was depicted in a frieze on the Arch of Titus, commemorating his triumphal parade in Rome following the destruction of Jerusalem in the year 70 CE.

In 2009, however, the ruins of a synagogue with pottery dating from before the destruction of the Second Temple were discovered under land in Magdala owned by the Legionaries of Christ, who had intended to construct a center for women's studies. Inside that synagogue's ruins was discovered a rectangular stone, which had on its surface, among other ornate carvings, a depiction of the seven-lamp menorah differing markedly from the depiction on the Arch of Titus, probably carved by an eyewitness to the actual menorah present at the time in the Temple at Jerusalem. This menorah has arms which are polygonal, not rounded, and the base is not graduated but triangular.

Representations of the seven lamp artifact have been found on tombs and monuments dating from the 1st century as a frequently used symbol of Judaism and the Jewish people.

The menorah symbolized the ideal of universal enlightenment. The seven lamps allude to the branches of human knowledge, represented by the six lamps inclined inwards towards, and symbolically guided by, the light of God represented by the central lamp. The menorah also symbolizes the creation in seven days, with the center light representing the Sabbath. It is also said to symbolize the burning bush as seen by Moses on Mount Horeb (Exodus 3).

Menorah is part of the Jewish Symbols group.

Have a discussion about Menorah with the community: