What's the meaning of the House Frey »

This page is about the meaning, origin and characteristic of the symbol, emblem, seal, sign, logo or flag: House Frey. 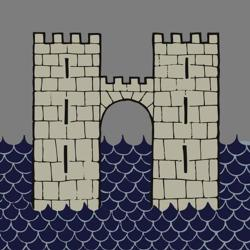 The sigil of House Frey from Game of Thrones.

The continent of Westeros is made up of many different regions, each of which has its own culture and history. Most of these regions form constituent parts of a single political realm, which is presided over by a ruling monarch. While they hold ultimate power over the realm, local governance of each region is handled by a “Great House”, a noble family whose members answer directly to the monarch. Each region also contains an extensive network of lesser noble houses called “Vassal Houses”, who owe their loyalty to the governing Great House. House Frey is one of the Vassal Houses in the Riverlands. Their ancestral castle – known as The Twins – sits astride the Green Fork, a tributary of the River Trident. House Frey’s sigil is a depiction of this castle on a field of grey and placed within blue water lines, and their motto is “We Stand Together”.

At the start of the series, the head of the house is Lord Walder Frey, who has a very unwholesome reputation among the other lords of Westeros; known for his irascible temper and extremely shallow loyalties, Lord Walder is willing to betray virtually anyone - for small or even imagined slights - if such an action would benefit him. In season three, Lord Walder ordered the massacre of the combined army of House Stark and his own overlords, House Tully, for refusing to honor a promise they had made him, even though he had no right to demand said promise in the first place. Since the massacre happened after Lord Walder had invited them into his home, it violated the sacred laws of hospitality and blackened his reputation even further. In season 6, Lord Walder was executed for his crimes, and in season 7 all of his kinsman who played a part in the massacre were massacred themselves. As such, the current status of House Frey is uncertain.

House Frey is part of the Coat of Arms group.

Have a discussion about House Frey with the community: