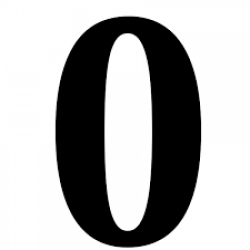 Zero is the number before 1 and after -1. It is used as a place holder in base ten systems.

Originally from Ancient Egypt, the number 0 was appearing in accounting texts by 1740 BC. By the middle of the 2nd millennium BC, the Babylonian mathematics had a sophisticated sexagesimal positional numeral system. The lack of a positional value (or zero) was indicated by a space between sexagesimal numerals. By 300 BC, a punctuation symbol (two slanted wedges) was co-opted as a placeholder in the same Babylonian system. In a tablet unearthed at Kish (dating from about 700 BC), the scribe Bêl-bân-aplu wrote his zeros with three hooks, rather than two slanted wedges.