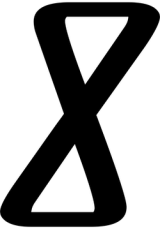 The letter "z" as rendered in the South Arabian alphabet.