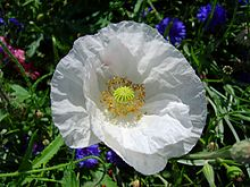 The white poppy is an artificial flower used as a symbol of peace, worn as an alternative to, or complement to, the red remembrance poppy for Remembrance Day or Anzac Day.

In 1926, a few years after the introduction of the red poppy in the UK, the idea of pacifists making their own poppies was put forward by a member of the No More War Movement (and that the black centre of the British Legion's red poppies should be imprinted with "No More War"). Their intention was to remember casualties of all wars, with the added meaning of a hope for the end of all wars; the red poppy, they felt, signified only the British military dead. However they did not pursue the idea. The first white poppies were sold by the Co-operative Women's Guild in 1933. The Peace Pledge Union (PPU) took part in their distribution from 1934, and white poppy wreaths were laid from 1937 as a pledge to peace that war must not happen again. Anti-war organisations such as the Anglican Pacifist Fellowship now support the White Poppy Movement.

Those who promote the wearing of white poppies argue that the red poppy also conveys a specific political standpoint, and point to the divisive nature of the red poppy in Northern Ireland, where it is worn mainly by the Unionist community. They choose the white poppy over the red often because they wish to disassociate themselves from the militaristic aspects of Remembrance Day, rather than the commemoration itself.