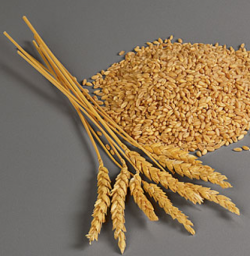 Perhaps more than any other grain, wheat has established a reputation as both a culinary staple and a cultural symbol. It has been cultivated since the very beginning of human history, and today is one of the most widely grown crops on earth.

When it comes to symbolism, wheat has much in common with similar staple crops, such barley, rice, and maize: A symbol of abundance, life, and fertility, wheat has also served as an emblem for deities associated with these notions, such as the Greek goddess of agriculture, Demeter. The name of her Roman counterpart, Ceres, gives us the word "cereal", which in its original usage referred to grains.

Wheat is associated with rebirth and resurrection, something also shared by the above-mentioned staple crops. This is due to a fairly straightforward aspect of the grain’s nature; when wheat sprouts from the soil after the barren season and grows into the mass of stalks that will feed the people throughout the year, it’s easy to see the phenomenon as new life emerging from the throes of death. This was particularly true in Egypt- considered the "breadbasket" of the ancient Mediterranean due to the sheer volume of wheat and other crops that it produced. Osiris, the Egyptian god of the underworld, was even given small bundles made of linen and stuffed with the sprouting grain as a form of religious offering. In Christianity, the resurrection aspect of wheat is also on display, albeit more subtly. The Eucharist, the bread that becomes the body of Christ during communion, is sometimes represented as wheat, or paired artistically with grapes, symbolizing the wine of communion (i.e. the blood of Christ).