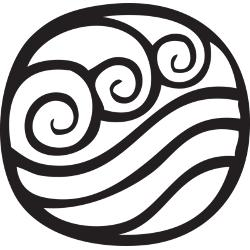 In the world of Avatar: The Last Airbender, waterbending is the ability to mentally manipulate water through the use of martial arts.

Waterbending is one of the four primary “bending arts” found throughout the world of Avatar, and is practiced by the culture known as the Water Tribes. Through the use of a specific kind of martial art (inspired aesthetically by Tai Chi, according to the creators of the series), waterbenders can move and manipulate water into virtually any shape or form they wish. This includes changing liquid water into its solid (ice) and gaseous (steam) forms, as well as controlling rain, snow and other water-based natural phenomena. Specialized skills within this discipline include manipulating plants by bending the water within them, and even controlling the body of another creature by bending their blood. In some cases, waterbenders are blessed with the ability to heal wounds by using water as a catalyst to redirect the energy paths, or chi, that flow around the patient’s body.