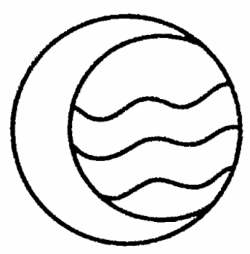 One of the “Four Nations” of the world of Avatar are the Water Tribes, who live primarily in the icy polar regions of the world (their culture was stylistically inspired by the Inuit). They are the people who practice the art of Waterbending, one of four methods of elemental manipulation in the series (for full details, see the symbol for ‘Waterbending’). The symbol of the Water Tribes is a circle containing a crescent moon and rippling waves. This represents the spirits of the Moon and the Ocean, which are held in great reverence by the tribes. According to legend, the Moon Spirit was the first Waterbender, and humans learned the art by watching how it pushed and pulled the tides of the ocean.

The Water Tribes of both the North and South Poles are famed as hunters and fisherman, but otherwise there is a great discrepancy between them. At the beginning of the series, the Northern Water Tribe is home to many benders and is a thriving cosmopolitan center, whereas the Southern Water Tribe is a smaller, mainly rural environment where the only bender is Katara, a 14-year old girl who becomes one of the leading characters throughout all three seasons of the series.