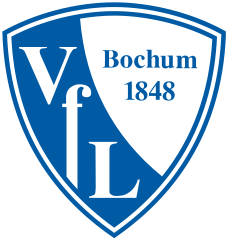 Verein für Leibesübungen Bochum 1848 Fußballgemeinschaft, commonly referred to as simply VfL Bochum , is a German association football club based in the city of Bochum, North Rhine-Westphalia. The club has spent 34 seasons in the Bundesliga.

VfL Bochum is one of the oldest sports organizations in the world, claiming an origin date of 26 July 1848 when an article in the Märkischer Sprecher – a local newspaper – called for the creation of a gymnastics club. The Turnverein zu Bochum was then formally established on 18 February 1849. The club was banned on 28 December 1852 for political reasons and then reestablished on 19 June 1860. The club was reorganized in May 1904 as Turnverein zu Bochum, gegründet 1848 and formed a football department on 31 January 1911.