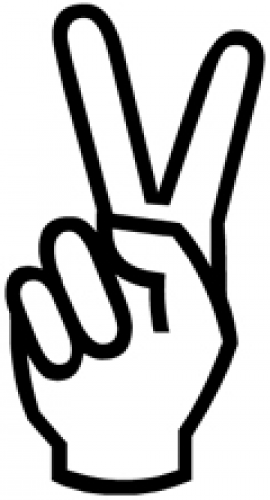 The V sign (U+270C ✌ victory hand in Unicode) is a hand gesture in which the index and middle fingers are raised and parted, while the other fingers are clenched. It has various meanings, depending on the cultural context and how it is presented. It is most commonly used to represent the letter "V" as in "victory," especially by Allied troops during World War II. It is also used by people of the United Kingdom and related cultures as an offensive gesture (when displayed with the palm inward); and by many others simply to signal the number 2. Since the 1960s, when the "V sign" was widely adopted by the counterculture movement, it has come to be used as a symbol of peace (usually with palm outward).

A commonly repeated legend claims that the two-fingered salute or V sign derives from a gesture made by longbowmen fighting in the English and Welsh army at the Battle of Agincourt (1415) during the Hundred Years' War. According to the story, the French were in the habit of cutting off the arrow-shooting fingers of captured English and Welsh longbowmen, and the gesture was a sign of defiance on the part of the bowmen, showing the enemy that they still had their fingers, or, as a widespread pun puts it, that they could still "pluck yew". The longbow story is of unknown origin, but the "pluck yew" pun is thought to be a definitively false etymology that seems to originate from a 1996 email that circulated the story.

The bowman etymology is unlikely, since no evidence exists of French forces (or any other continental European power) cutting off the fingers of captive bowmen; the standard procedure at the time was to summarily execute all enemy commoners captured on the battlefield (regardless of whether they were bowmen, foot soldiers or merely unarmed auxiliaries) since they had no ransom value, unlike the nobles whose lives could be worth thousands of florins apiece.

The first unambiguous evidence of the use of the insulting V sign in England dates to 1901, when a worker outside Parkgate ironworks in Rotherham used the gesture (captured on the film) to indicate that he did not like being filmed. Peter Opie interviewed children in the 1950s and observed in The Lore and Language of Schoolchildren that the much older thumbing of the nose (cock-a-snook) had been replaced by the V sign as the most common insulting gesture used in the playground.