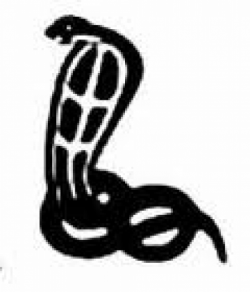 The Uraeus (/jʊˈriəs/; plural Uraei or Uraeuses; from the Greek οὐραῖος, ouraīos, "on its tail"; from Egyptian jʿr.t (iaret), "rearing cobra") is the stylized, upright form of an Egyptian cobra (asp, serpent, or snake), used as a symbol of sovereignty, royalty, deity, and divine authority in ancient Egypt.

The Uraeus is a symbol for the goddess Wadjet, who was one of the earliest Egyptian deities and who often was depicted as a cobra.

The golden uraeus, or royal cobra, of Senusert the Second was once fixed to the front of the royal headdress or the crown of the king. The body of the uraeus is made of hammered gold inlaid with semiprecious stones set into cloisonne.