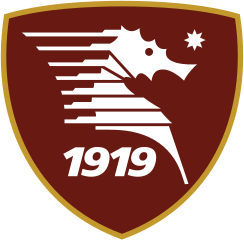 Unione Sportiva Salernitana 1919, commonly referred to as Salernitana, is an Italian football club based in Salerno, Campania. Salernitana returned to Serie A in 2021, after a break of 23 seasons, having finished second in Serie B. Previously in 2015 "I Granata" were promoted to Serie B, having finished first in Lega Pro Prima Divisione - Girone C. The club is the legitimate heir of the former Salernitana Calcio 1919 and there is a sports continuity also with the former Salerno Calcio in the 2011–12 season which restarted from Serie D rather than from Terza Categoria due to Article 52 NOIF of FIGC.

Salernitana originally wore light blue and white striped shirts, known in Italy as biancocelesti. The blue on the shirt was chosen to represent the sea, Salerno the city lies right next to the Gulf of Salerno and has a long tradition as a port city. In the 1940s, the club changed to garnet coloured shirts, which has gained them the nickname granata in their homeland.