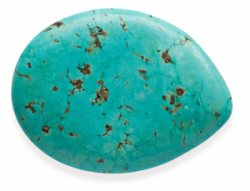 Like many gemstones, turquoise possesses a number of different symbolic meanings.

The very word “turquoise” possesses an interesting history; although the stone was primarily mined in Iran, it reached Europe by way of traders in modern-day Turkey. Hence, the name of this gem comes from French and roughly means ‘Turkish stone’, indicating its origins as the Europeans knew it.

Etymology aside, turquoise is one of the most ancient and symbolically charged gemstones in the world. It has been mined in Iran for over six thousand years, where it was widely used in decoration. Different cultures have all assigned turquoise specific meanings in their turn, and in modern times the stone itself has become a cultural symbol.

Turquoise tends to exhibit a pale sky blue color, sometimes with hints of green mixed in. It all depends on the mineral content (mainly iron and copper) of individual stones. There is a traditional belief that the color of a turquoise stone will change if the stone’s wearer is sick or in danger. While it may sound strange, that particular story has a grain truth to it; turquoise is porous by nature and its color can be affected by heat and temperature, and by exposure to foreign substances such as perfume or cosmetics. From there, it’s not too much of a leap to imagine that the stone could be a health indicator: If someone is feverish or sweating while wearing a piece of turquoise jewelry (or simply spills makeup on it) and the color of the stone suddenly changes, they could easily believe that the two things were connected.

One area where turquoise carries powerful meaning is in the southwestern United States, where large deposits of the stone are found. Native American tribes in the area, such as the Pueblo and the Navajo, have held turquoise in high regard for centuries. For the Pueblo, it was a symbol of the sky and believed to possess protective qualities. In Navajo beliefs, turquoise is associated with Mount Taylor in present-day New Mexico, one of four directionally-oriented mountains that the Navajo consider sacred. In more modern times, Native American tribes from the southwest have become famous for their intricately worked silver and turquoise jewelry, so turquoise has become a symbol in its own right, representing the culture of the area.

Turquoise also found prominent meaning among the cultures of Mesoamerica, a region encompassing modern-day Mexico and parts of Central America. The Aztecs, who dominated the region from the 14th to the 16th centuries, most likely acquired turquoise via trade with Native American tribes to the north. Turquoise was so important in Aztec culture that they believed it to be the stone of the gods; deities such as the war god Huitzilopochtli were strongly associated with it, and in Aztec society only the emperor was allowed to wear jewelry or other ornaments made of turquoise. In the archaeological record, there are any number of ceremonial masks and other Aztec religious items where turquoise is used as a component, further indicating the people’s reverence of the substance.

Besides Iran and the southwestern United States, another source of turquoise, at least in ancient times, was the Sinai Peninsula (part of modern-day Egypt). The ancient Egyptians were mining turquoise here at least as early as the Old Kingdom period (roughly the 27th to the 22nd centuries BCE) and, like the Pueblo, they revered the stone as a symbol of protection.

Turquoise is also the traditional birthstone for the month of December.