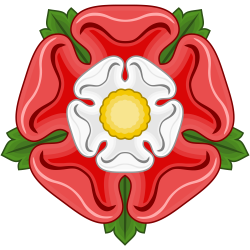 Appearing in a range of slightly varying forms, the Tudor Rose has been a traditional symbol of the English monarchy since it first appeared in the late 15th century.

The previous decades of English history had been marked by civil war between these two houses (dubbed the "War of the Roses"). At the war's conclusion, the houses were united through this marriage, and the Tudor Dynasty, which ruled England until the death of Queen Elizabeth I in 1603, was founded.