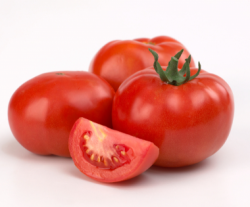 A popular ingredient in many cuisines, tomatoes have made quite an impact on the world ever since they spread beyond their homelands of Mexico and Central America. In terms of symbolism, the tomato shares qualities with many similar foodstuffs, but possesses a few features that are all its own.

The basic meaning of the tomato is not difficult to understand; with its red color, juicy texture and many seeds, the tomato is clearly a sensual plant and can be viewed as an aphrodisiac. When it arrived in Europe in the 16th century, the Christian church deemed it lewd and disapproved of tomato consumption. While not entirely for this reason, it was several centuries before Europeans began to eat tomatoes in any quantity. Since it was later discovered that tomatoes are in the same botanical family as deadly nightshade- a highly dangerous poison- perhaps they were right to be cautious?

Among the Bambara people of present-day Mali, the story was different. Introduced to West Africa by subsequent traders and slavers, tomatoes have had an extensive impact on the region. The Bambara view tomatoes as symbols of blood, life and fertility. On a culinary level, tomatoes have become one of the “holy trinity” of West African cooking, along with onions and chili peppers.

Linguistically, the tomato possesses some interesting features. During their early days in Europe, tomatoes were known as “love apples”, and this moniker developed from a few different influences. Since early specimens of the plant were yellow (presumably the red varieties were not developed until later), there were known in Italian as “pomo d’or” or apple of gold. Another name for them was “pomo d’Moro” or apple of the Moors (this referred to the Spanish explorers who brought tomatoes back from the New World, as Spain had been occupied by the Muslim Moors until just a few generations prior). From such roots, the French “pomme d’amour” or love apple developed.