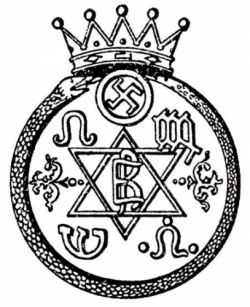 The Theosophical Society is an organization formed in 1875 to advance theosophy. The original organization, after splits and realignments, currently has several successors.

The Theosophical Society was officially formed in New York City, United States, on 17 November 1875 by Helena Petrovna Blavatsky, Colonel Henry Steel Olcott, William Quan Judge and others. It was self-described as "... an unsecterian body of seekers after Truth, who endeavour to promote Brotherhood and strive to serve humanity." Olcott was its first president, and remained president until his demise in 1907. In the early months of 1875, Olcott and Judge had come to realize that, if Blavatsky was a spiritualist, she was no ordinary one. The society's initial objective was the "study and elucidation of Occultism, the Cabala etc." After a few years Olcott and Blavatsky moved to India and established the International Headquarters at Adyar, in Madras (Chennai).