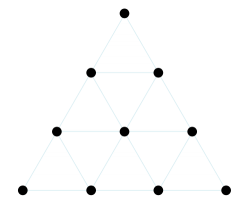 The tetractys (Greek: τετρακτύς), or tetrad, is a triangular figure consisting of ten points arranged in four rows: one, two, three, and four points in each row, which is the geometrical representation of the fourth triangular number. As a mystical symbol, it was very important to the secret worship of the Pythagoreans.

The first four numbers symbolize the harmony of the spheres and the Cosmos as: Unity, Dyad - Power - Limit/Unlimit (peras/apeiron), Harmony & Kosmos.

The four rows add up to ten, which was unity of a higher order (The Dekad).

The Tetractys represented the organization of space:

the second row represented one-dimension (a line of two points)