The Square and Compasses Symbol 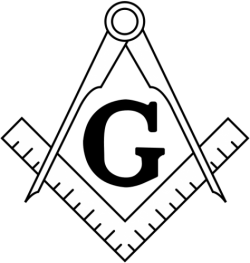 The Square and Compasses (or, more correctly, a square and a set of compasses joined together) is the single most identifiable symbol of Freemasonry.

Both the square and compasses are architect's tools and are used in Masonic ritual as emblems to teach symbolic lessons. Some Lodges and rituals explain these symbols as lessons in conduct: for example, Duncan's Masonic Monitor of 1866 explains them as: "The square, to square our actions; The compasses, to circumscribe and keep us within bounds with all mankind". However, as Freemasonry is non-dogmatic, there is no general interpretation for these symbols (or any Masonic symbol) that is used by Freemasonry as a whole.

As measuring instruments, the tools represent judgment and discernment.

In English speaking jurisdictions the Square and Compasses are often depicted with the letter "G" in the center. The letter is interpreted to represent different words jurisdiction to jurisdiction. Among the most widely accepted interpretations are that: [G] stands for God, and is to remind Masons that God is at the center of Freemasonry. In this context it can also stand for Great Architect of the Universe (a reference to God). In a different context, the letter stands for Geometry, described as being the "noblest of sciences", and "the basis upon which the superstructure of Freemasonry is erected."