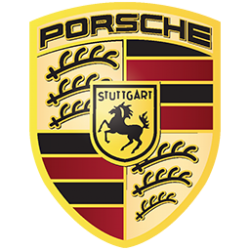 Porsche's company logo was based on the coat of arms of Free People's State of Württemberg of former Weimar Germany, which had Stuttgart as its capital and became part of Baden-Württemberg after the political consolidation of West Germany in 1949.

Not long afterwards, on 30 January 1951, Ferdinand Porsche died from complications following a stroke.