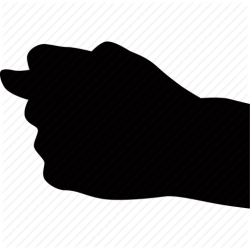 The fig sign is a mildly obscene gesture used in Turkish and Slavic cultures and some other cultures that uses two fingers and a thumb. This gesture is most commonly used to deny a request.

Another use of this gesture is for warding off evil eye, jealousy, etc.

In ancient Rome, the fig sign, or mano fico, was made by the pater familias to ward off the evil spirits of the dead as a part of the Lemuria ritual.

The hand gesture may have originated in ancient Hindi culture to depict the lingam and yoni.

Among early Christians, it was known as the manus obscena, or "obscene hand".

Recently, a Ukrainian word for this gesture "дуля" (dulya) has also become a jargon to refer to Control-Alt-Delete. ("...you need three fingers to press the buttons. So it's like telling somebody (a computer in this case) to get lost.")

The letter "T" in the American manual alphabet is very similar to this gesture.