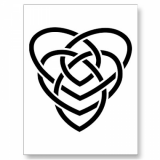 Celtic knots, called Icovellavna, are a variety of knots and stylized graphical representations of knots used for decoration, used extensively in the Celtic style of Insular art. These knots are most known for their adaptation for use in the ornamentation of Christian monuments and manuscripts, such as the 8th-century St. Teilo Gospels, the Book of Kells and the Lindisfarne Gospels. Most are endless knots, and many are varieties of basket weave knots.

The Celtic Motherhood Knot is a stylized holy trinity knot depicting a parent and child embrace. It is representative of the Madonna and child. Combined with a Celtic trinity knot it is a true testament to the enduring bond between a mother, her child, faith and their Celtic heritage.

The Celtic motherhood symbol looks like 2 hearts made out of knot work. One heart is lower than the first heart and both hearts are intertwined in a continuous knot.

The Celtic Motherhood Knot tattoo, also referred as the Celtic Mother’s Knot tattoo has two hearts that are intertwined continuously in a knot devoid of any end. It signifies a mother and a child relationship in the best way for Celtic or Irish people.