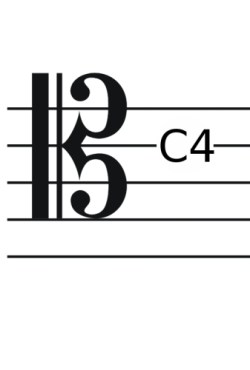 When the C-clef is placed on the fourth line of the stave, it is called the tenor clef.

This clef is used for the upper ranges of the bassoon, cello, euphonium, double bass, and trombone (all of which can be notated in bass clef as well, which is the current practice in most modern manuscripts, and when notating parts in the extreme upper range of these instruments, the treble clef can be used as well). The tenor violin parts were also written in this clef (see e.g. Giovanni Battista Vitali's Op. 11). Formerly, it was used by the tenor part in vocal music but its use has been largely supplanted either with an octave version of the treble clef when written alone or the bass clef when combined on one stave with the bass part. The double bass sounds an octave lower than the written pitch.