Tartan of the American Scottish Foundation 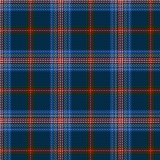 A vibrant design merging the Stars & Stripes with the Saltire, this tartan celebrates the close cultural and family ties between the two countries, fostered for over half a century by the American Scottish Foundation. In homage to the principle figures whose dedication has nurtured and grown the Foundation to its 21st century role, elements of their tartans form the secondary focus of the design - black on green from the MacKay tartan, green on red from the Scott tartan, and white on red from the Hamilton tartan.**