Tartan of the 78th Highlanders Regiment 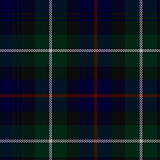