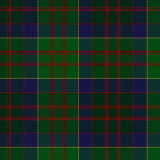 Barbecue Presbyterian Church, located in Sandford, North Carolina, was founded in 1758 by Scottish Presbyterians who left Jura, Skye and the Presbytery of Inverary in 1739 to sail to America. It was Barbecue Church that issued the first call in North Carolina to a Presbyterian minister, who came and settled in the area. This tartan was designed for the 250th anniversary of the church. It is based on the MacDonald tartan, as Flora MacDonald attended this church while living with her half-sister, Anna Bella MacDonald. The church's web site is www.barbecuech1758.org.**