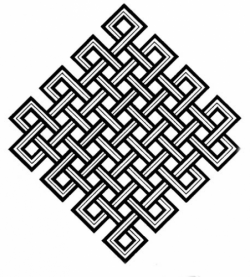 The Srivatsa is an ancient symbol, considered auspicious in India. Alternative transliterations include Shreevatsa, Śrīvatsa, Shrivatsa, Srivathsa and Sri Vatsa.

Srivatsa means "beloved of Sri", where Sri refers to the goddess Lakshmi. It is a mark on the chest of Vishnu where his consort Sri Lakshmi resides. It is said that the tenth avatar of Vishnu, Kalki, will bear the Srivatsa mark on his chest. Srivatsa-vakshaah ("One who has Srivatsa on his chest") is a name of Vishnu mentioned in the Vishnu Sahasranam.

In Buddhism, the Srivatsa is said to be a feature of the tutelary deity Manjusri the Youth. Tibetan Buddhists depict the Srivatsa as a triangular swirl or an endless knot.

In Jainism, it often marks the chest of the Tirthankara statue. It is one of the ashtamangala. It can look somewhat like a fleur-de-lis, an endless knot, a flower or diamond shaped symbol.

The srivatsa is also the symbol of Rakhine State and the Arakanese people of Myanmar.