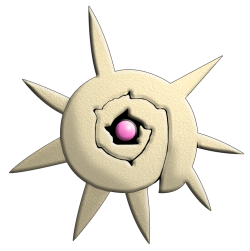 One of four signature items found in a specific story arc of the Pokémon franchise.

In the animated series of Pokémon, the second primary story arc takes place in a location called the Orange Archipelago, a large ring of tropical islands to the south of the Kanto Region, the setting for the first major story arc. Although this region never appeared in any of the numerous video games related to the franchise, it was the setting of The Power of One, the second Pokémon feature film (released in 2000), and the arc of the TV series is noteworthy in its own right.

The primary focus of this story arc is the Orange League competition, in which Pokémon trainers must win badges from gym leaders on four specific islands. The Spike Shell Badge is received from the gym on Trovita Island, located at the southern edge of the archipelago. Especially noteworthy regarding the Orange League is the style of battle in these four gyms; much more than simply going head-to-head with each other, Orange League gym battles often feature Pokémon using highly specialized techniques in order to accomplish very specific tasks. Much like professional athletes, the Pokémon’s performance in each of these tasks builds up in layers of success until a winner is decided. Once all four badges are earned, the competitor is qualified to challenge the leader of the Orange League. If victorious, they will receive the Winner’s Trophy and be inducted into the Orange League Hall of Fame.