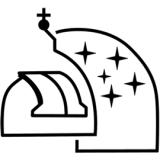 Specola Vaticana is an astronomical research and educational institution supported by the Holy See.

The Church has had a long-standing interest in astronomy, due to the astronomical basis of the calendar by which holy days and Easter are determined. For instance, the Gregorian Calendar, promulgated in 1582 by Pope Gregory XIII, was developed by Aloysius Lilius and later modified by Christoph Clavius at the Collegio Romano from astronomical data. The Gregorian Tower was completed in 1580 for his purpose, designed by Bolognese architect Ottaviano Nonni.

In the 18th century, the Papacy actively supported astronomy, establishing the Observatory of the Roman College in 1774. In 1789–1787, the Specola Vaticana in the Tower of the Winds within the Vatican was established under the direction of Msgr. Filippo Luigi Gilii (1756–1821). When Msgr. Gilii died, the Specola was closed down because it was inconvenient for students in the city because the dome of St. Peter's obstructed its view. Its instruments were transferred to the College Observatory. A third facility, the Observatory of the Capitol, was operated from 1827 to 1870.

In 1891, however, Pope Leo XIII issued a Motu Proprio re-founding the Specola Vaticana (Vatican Observatory) and a new observatory was built on the walls at the edge of the Vatican. The new Vatican Observatory remained there for the next forty years.

In the late nineteenth-century the Vatican Observatory was part of a group of top astronomy institutions from around the world which worked together to create a photographic "Celestial Map" ("Carte du Ciel") and an "astrographic" catalog pinpointing the stars' positions. Italian astronomer Father Francesco Denza led the Vatican's contribution to the project until his death in 1894. In the early twentieth-century Father John Hagen took over the project and recruited a group of nuns from the Sisters of the Holy Child Mary to work on the necessary recording and calculations. The sisters were Sisters Emilia Ponzoni, Regina Colombo, Concetta Finardi and Luigia Panceri.