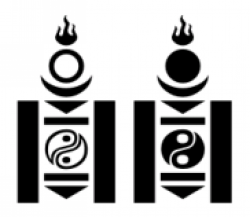 The Soyombo symbol is a special character out of the Mongolian Soyombo script that was invented by Zanabazar in 1686. It serves as a national symbol of Mongolia, to be found on the Flag of Mongolia, the Coat of arms of Mongolia, and on many other official documents.

The elements in the symbol are given the following significance (from top):

Fire is a general symbol of eternal growth, wealth, and success. The three tongues of the flame represent the past, present, and future.

Sun and moon symbolise that the Mongolian nation will exist for eternity as the eternal blue sky. Sun, moon and fire symbols derived from Xiongnu.

The two triangles allude to the point of an arrow or spear. They point downward to announce the defeat of interior and exterior enemies.

The two horizontal rectangles give stability to the round shape. The rectangular shape represents the honesty and justice of the people of Mongolia, whether they stand at the top or at the bottom of society.

The arga-bilge (Yin-yang) symbol illustrates the mutual complement of man and woman. In socialist times, it was alternatively interpreted as two fish symbolizing vigilance, because fish never close their eyes.

The two vertical rectangles can be interpreted as the walls of a fort. They represent unity and strength, relating to a Mongolian proverb: "The friendship of two is stronger than stone walls."

In the Soyombo script, the two variations of the Soyombo symbol are used to mark the start and end of a text. It is thought to be possible that the symbol itself may predate the script.