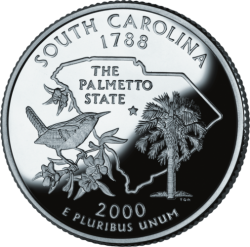 South Carolina became a state on May 23rd, 1788, and was the eighth of the 50 State Quarters to be issued. Several distinct images are present on the coin: an outline of the state’s border, with a star marking the position of the capital; a Carolina Wren (the state bird) perched on a branch of Yellow Jessamine/Jasmine (the state flower); and a Palmetto tree. This last image is a reference to the Revolutionary War, when colonists built a fort out of Palmetto logs and prevented the British from gaining control of Charlestown Harbor.