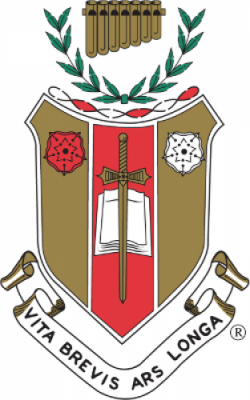 Sigma Alpha Iota (ΣΑΙ) is an International Music Fraternity. Formed to "uphold the highest standards of music" and "to further the development of music in America and throughout the world", it continues to provide musical and educational resources to its members and the general public.

The red and white Sigma Alpha Iota symbol features a pan pipes, a sword and the "Ars longa, vita brevis" sentence, which is a Latin translation of an aphorism coming originally from Greek. The Latin quote is often rendered in English as Art is long, life is short.