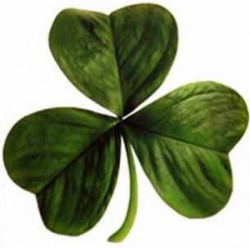 In modern times, this little weed has come to serve as a visual metaphor for anything connected with Ireland, and many people simply take it at face value. However, the shamrock actually has some interesting history behind it that everyone should know about.

St. Patrick, the patron saint of Ireland, was born in Roman-occupied Britain, probably in the late 4th or early 5th century C.E. The story goes that when he arrived in Ireland and started spreading the Gospel, he used the shamrock as way to explain the concept of The Trinity to the locals; how there is only one God but He can take three forms (Father, Son and Holy Spirit), much like the shamrock has three separate leaves but they all sprout from the same stem.

Besides its association with the Irish and their culture, the shamrock was also a religious symbol in pre-Islamic Arabia. Before the rise of Islam in the 7th century CE, people of the Arabian Peninsula worshipped a trio of goddesses known as Manat, Al-Uzza and Al-Lat. The three-leafed shamrock was used as a visual symbol for these goddesses and, in fact, one possible etymological origin of “shamrock” is the Arabic word ‘shamrakh’.