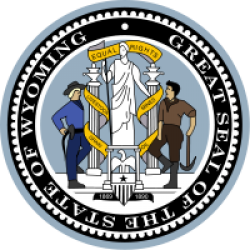 The two dates on the Great Seal, 1869 and 1890, commemorate the organization of the territorial government and Wyoming's admission to the Union. The draped figure in the center holds a staff from which flows a banner bearing the words, "Equal Rights." The banner symbolizes the political status women have enjoyed in Wyoming since the passage of the territorial suffrage amendment in 1869. The male figures typify the livestock and mining industries of the state. The number 44 on the five-pointed star signifies that Wyoming was the 44th state admitted to the Union. On top of the pillars rest lamps from which burn the Light of Knowledge. Scrolls encircling the two pillars bear the words, Oil, Mines, Livestock, and Grain, four of Wyoming's major industries.