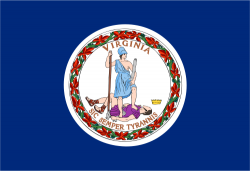 The obverse of the seal is the official seal of Virginia and is used on all the official papers and documents of the Commonwealth's government, as well as on its flag. On this side, a female figure personifying the Roman virtue of Virtus was selected to represent the genius of the new Commonwealth. Virginia's Virtus is a figure of peace, standing in a pose which indicates a battle already won. She rests on her long spear, its point turned downward to the ground. Her other weapon, a parazonium, is sheathed; it is the sword of authority rather than that of combat. Virtus is typically shown with a bare left breast; this is commonly recognized as the only use of nudity among the seals of the U.S. states.Tyranny lies prostrate beneath the foot of Virtus, symbolizing Great Britain's defeat by Virginia. The royal crown which has fallen to the ground beside him symbolizes the new republic's release from the monarchical control of Great Britain; Virginia and New York are the only U.S. states with a flag or seal displaying a crown. The broken chain in Tyranny's left hand represents Virginia's freedom from Britain's restriction of colonial trade and westward expansion. The useless whip in his right hand signifies Virginia's relief from the torturing whip of acts of punishment such as the Intolerable Acts. His robe is purple, a reference to Julius Caesar and the Etruscan king of Rome, Tarquinius Priscus.The motto selected for the obverse of the Virginia seal is Sic semper tyrannis, or in English, Thus always to tyrants. This is a derived quote from the famous events in Roman history, attributed to Brutus upon his participation in the slaying of Julius Caesar. (Caesar had been named perpetual dictator of Rome in the same year, and some Senators believed had ambitions to abolish the Roman Republic and establish himself as a monarch.)In 2001, the North American Vexillological Association (NAVA) surveyed its members on the designs of the 72 U.S. state, U.S. territorial and Canadian provincial flags. NAVA's members ranked Virginia's flag 54th out of the 72.