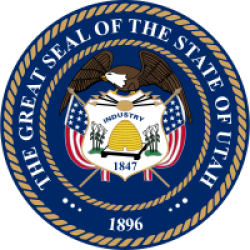 The Great Seal of the State of Utah was adopted on April 3, 1896, at the first regular session of the Legislature (January, February, March, April 1896).

The original seal was designed by Harry Edwards and cost $65.00. The great seal is described in Utah Code Annotated, 1953, Volume 7a, section 67-2-9 as follows:

"The Great Seal of the State of Utah shall be two and one-half inches in diameter, and of the following device; the center a shield and perched thereon an American Eagle with outstretching wings; the top of the shield pierced by six arrows crosswise; under the arrows the motto "INDUSTRY"; beneath the motto a beehive, on either side growing sego lilies; below the figures "1847"; on each side of the shield an American Flag.; encircling all, near the outer edge of the seal, beginning at the lower left-hand portion, the words, "THE GREAT SEAL OF THE STATE OF UTAH", with the figures "1896" at the base."