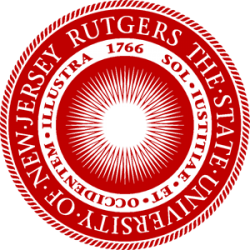 The University Seal based on that of the University of Utrecht in the Netherlands whose motto around a sun is "Sol iustitiae illustra nos": "Sun of righteousness, shine upon us".

Rutgers modified the Utrecht seal to read "Sol iustitiae et occidentem illustra"; embracing the Western world, meaning "Sun of righteousness, shine upon the West also." The boards of governors and trustees approved a revised seal for the University 1997 that includes the words "Rutgers, The State University of New Jersey" and adds the 1766 founding date.